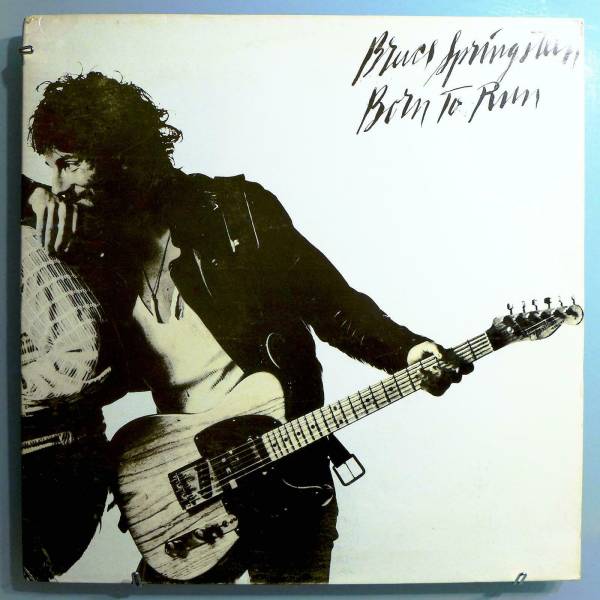 <img src= http://pics WE CURRENTLY HAVE  MORE  THAN 500 LISTED ITEMS


·       INSANELY RARE ORIGINAL 1975 COLUMBIA TEST PRESSING WITH THE MONSTROUSLY RARE 'SCRIPT' COVER WITH  DRAMATICALLY DIFFERENT FONT AND WITHOUT ANY GRAPHICS, LOGOS, OR ANY OTHER PRINT EXCEPT FOR BRUCE SPRINGSTEEN'S NAME AND ALBUM TITLE (AND NO PRINT OF ANY KIND ON THE INSIDE OF THE GATEFOLD)

·       The album comes with the following inserts:

·       Typewritten, mimeographed 10-page lyrics to ALL tracks from the Bruce Springsteen's PRECEDING album  (The Wild, The Innocent and the E-Street Shuffle)

·       Typewritten, mimeographed 8-page lyrics to ALL tracks from Born to Run

·       THIS IS THE ORIGINAL, AUTHENTIC, FIRST U.S. TEST PRESSING; THIS IS NOT A REISSUE, AN IMPORT, OR A COUNTERFEIT PRESSING.

(►PLEASE SEE THE IMAGE OF THE COVER, LABEL OR BOTH, SHOWN BELOW)
(Note: this is a REAL image of the ACTUAL item you are bidding on. This is NOT a "recycled" image from our previous auction. What you see is what you’ll get.  GUARANTEED!)

Representing Springsteen's effort to break into the mainstream, Born to Run was a critical and commercial success. It peaked at number three on the Billboard 200, eventually selling six million copies in the US by the year 2000. Two singles were released from the album: "Born to Run" and "Tenth Avenue Freeze-Out"; the first helped Springsteen to reach mainstream popularity. The tracks "Thunder Road" and "Jungleland" became staples of album-oriented rock radio and Springsteen concert high points.

Born to Run garnered widespread critical acclaim. Praise centered on its production quality and Springsteen's songwriting, which focuses on the coming of age of average teenagers and young adults in New Jersey and New York City.

Springsteen began work on the album in May 1974. Given an enormous budget in a last-ditch effort at a commercially viable record, Springsteen became bogged down in the recording process while striving for a wall of sound production. But, fed by the release of an early mix of "Born to Run" to progressive rock radio, anticipation built toward the album's release.

Springsteen has noted a progression in his songwriting compared to his previous work. Unlike Greetings from Asbury Park, N.J. and The Wild, the Innocent and the E Street Shuffle, Born to Run includes few specific references to places in New Jersey, in an attempt to make the songs more identifiable to a wider audience. Springsteen has also referred to a maturation in his lyrics, calling Born to Run "the album where I left behind my adolescent definitions of love and freedom—it was the dividing line." In addition, Springsteen spent more time in the studio refining songs than he had on the previous two albums. All in all, the album took more than 14 months to record, with six months alone spent on the song "Born to Run" itself. During this time Springsteen battled with anger and frustration over the album, saying he heard "sounds in [his] head" that he could not explain to the others in the studio. During the process, Springsteen brought in Jon Landau to help with production. This was the beginning of the breakup of Springsteen's relationship with producer and manager Mike Appel, after which Landau assumed both roles. The album was Springsteen's first to feature pianist Roy Bittan and drummer Max Weinberg (although David Sancious and Ernest "Boom" Carter played the piano and drums, respectively, on the title track).

The album is noted for its use of introductions to set the tone of each song (all of the record was composed on piano, not guitar), and for the Phil Spector-like "Wall of Sound" arrangements and production. Indeed, Springsteen has said that he wanted Born to Run to sound like "Roy Orbison singing Bob Dylan, produced by Spector." Most of the tracks were first recorded with a core rhythm section band comprising Springsteen, Weinberg, Bittan, and bassist Garry Tallent, with other members' contributions then added on.

In terms of the original LP's sequencing, Springsteen eventually adopted a "four corners" approach, as the songs beginning each side ("Thunder Road", "Born to Run") were uplifting odes to escape, while the songs ending each side ("Backstreets", "Jungleland") were sad epics of loss, betrayal, and defeat. (Originally, he had planned to begin and end the album with alternative versions of "Thunder Road".)

The original album cover has the title printed in a graffiti style font. These copies, known as the "script cover," are very rare and considered to be the "holy grail" for Springsteen collectors

The album's release was accompanied by a $250,000 promotional campaign by Columbia directed at both consumers and the music industry, making good use of Landau's "I saw rock 'n' roll's future—and its name is Bruce Springsteen" quote. With much publicity, Born to Run vaulted into the top 10 in its second week on the charts and soon went Gold. Time and Newsweek magazines put Springsteen on the cover in the same week (October 27, 1975) – in Time Magazine, Jay Cocks praised Springsteen, while the Newsweek article took a cynical look at the "next Dylan" hype that haunted Springsteen until his breakthrough. The question of hype became a story in itself as critics began wondering if Springsteen was for real or the product of record company promotion.

Upset with Columbia's promotion department, Springsteen said the decision to label him as the "future of rock was a very big mistake and I would like to strangle the guy who thought that up." When Springsteen arrived for his first UK concert at the Hammersmith Odeon, he personally tore down the "Finally the world is ready for Bruce Springsteen" posters in the lobby and ordered that the buttons with "I have seen the future of rock 'n' roll at the Hammersmith Odeon" printed on them not be given out. Now fearing the hype might backfire, Columbia suspended all press interviews with Springsteen. When the hype died down, sales tapered off and the album was off the chart after 29 weeks. But the album had established a solid national fan base for Springsteen which he would build on with each subsequent release.

(EXCERPT FROM AN ONLINE ARTICLE IN WIKIPEDIA.ORG)

Why The Boss (or someone from his entourage,  or at Columbia, his  recording label) decided to, at the proverbial last moment,  change the original cover, font and typeset of his ground-breaking third album and completely scuttle the proposed graphic design, replacing it with something much simpler and more elegant, is a matter of some conjecture and speculation.  We do not have any final answer, but there could be three possible explanation for the sudden decision to replace the graphic "script" font in the album title with something leaner,  meaner, more urbane and elegant.

- The simplest and most widely accepted theory was that that the people around Springsteen thought the album title too difficult to discern and to read in its "script" configuration (indeed, the "script" font does look a wee bit strange, even  bizarre, almost kinda gothic in appearance, and definitely counterintuitive relative to the album's urban appeal). So, out the window the grotesque Victorian font went, and was replaced with something more elegant and modern. Voila! The Boss goes  lean'n' mean! Done deal!

-  The second theory also makes sense: that this was simply an impromptu lettering and typeset and that it was never really intended to stick. Therefore, the decision to abandon the impromptu graphic design after the minute press run of test pressings distributed to the music industry professionals was exhausted was only natural and to be expected.

However, we have a totally, radically, new - third -  theory: namely, this particular  font - as was used on the 'script cover' test pressings such as the one we have here,  was common to a whole slew of 1970s rock and pop releases, and can be found on albums by artists such as Mamas and Papas ("People like us"), Boz Scaggs ("Moments") , Loggins and Messina (first album), Laura Nyro (New York Tendaberry, the withdrawn version) and literally tens, possibly hundreds of other 1970s releases. It was essentially a "cookie-cutter" kind of generic font the recording industry - but Columbia in particular - had used indiscriminately whenever they ran out of original ideas and were in the rush to release something quick. Because this font was pretty much associated with bland, '70s AOR Rock, soft-pop and easy-listening, we assume that Bruce Springsteen must have freaked out when he saw himself in the same league as Loggins and Messina and Mamas and Papas and ordered the graphics radically reworked right on the spot. Indeed, if this was The Boss's motive, the plan worked: the final font, as used on the final release of Born to Run, is almost as iconic as the album itself.

Needless to say, copies of the original "script covers" cover, which we are offering here, have been known to change hands for more than $3,000.00. This is the item of such historical significance that missing out on it would be a major act of foolishness. Don’t fail to grab (by the script!) this insanely rare piece which is only offered once in a blue moon.