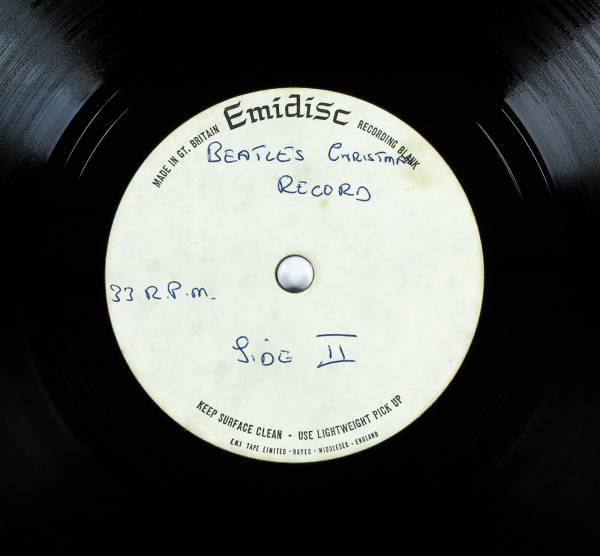 In December 1970 Apple, in conjunction with the Beatles Fan Club, issued the album 'From Then To You' (otherwise known as 'The Christmas Album') which was a compilation of all The Beatles' Christmas messages from 1963 to 1969.

It is not clear exactly when this acetate was cut, but analysis of the recordings on the acetate tell us that they are the same dubs which appeared on the 1970 'From then To You'.

You can clearly hear the stylus being taken off each disc and then being placed onto the next one.

Unfortunately we have no backstory about the origins of this disc and it does not come with any original cover.
The acetate weighs: 202g

Both are clean & fully intact with minor age-related toning to the paper on each.

Both playing surfaces are clean with some faint surface marks (mostly from storage) visible beneath halogen light but no scratches. The lacquer around the label on side 1 has started to lift a little and a small spot missing. However, the playing surfaces are unaffected. There are one or two tiny chips to the lacquer on the edge of the disc but again, they do not affect the playing surfaces. Both sides of the acetate lie flat on the turntable when playing and is not dished or warped.

All tracks play without any major issues on our one and only test play. Some faint 'wooshing' is audible on the 1963 message but there are no clicks, pops, jumps or any other faults.

This LP will be packed in professional packaging to make sure it reaches you in the same condition it leaves us.


If you would like to get the best price for your rare vinyl, contact us for details about how we can help.