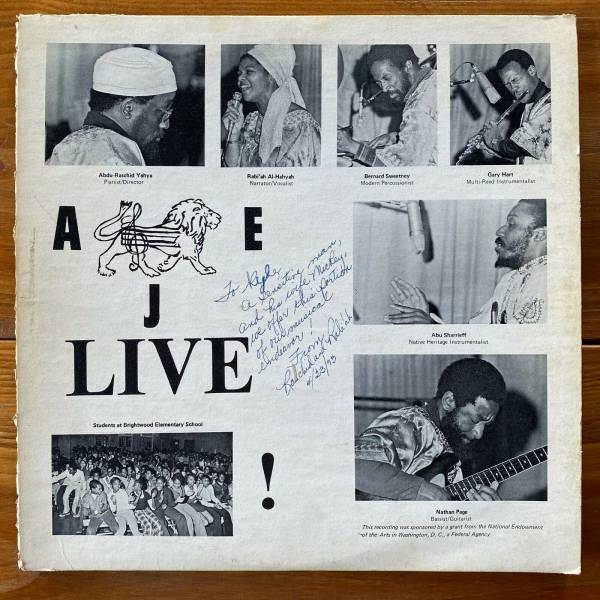 Please read the shipping section below before bidding.

This is a once in a lifetime find.  I’m selling this for a friend, but I would desperately love to own it myself.  It’s captures the Washington D.C. based African Jazz Ensemble at Brightwood Elementary School on the anniversary of Martin Luther King, Jr.’s birthday, January 15, 1973.  This was ten years before his birthday was recognized as a national holiday.  The ensemble is led by pianist Abdu-Raschid Yahya.  The musicians were selected by a group of local music educators to participate in a “Concerts In Schools” program.  The program began in 1971 under Yahya’s leadership, and the pivotal decision made was to select Rabi’ah Al-Hahyah as the group’s spokesperson and vocalist.  The woman will astound you.  The group covers black history through her message, both as a narrator and as a vocalist.  Her narrated message could have been recorded yesterday given the realities of our time and place.  Her interpretation of Nina Simone’s “Four Women” had me shaking in tears.  This beautiful album, with contributions from a school full of enthralled children, was released on Mark Records in 1973, number MC 8323.  This is the original release of the album.  The vinyl is in exceptional condition with its bright original luster and just a few light surface scratches, none of which significantly impact play.  It plays beautifully with just very light sporadic background noise and a few small tics.  The vinyl grades VG.  The album cover has been autographed with a message signed by Yahya and Al-Hahyah, though I suspect written by Al-Hahyah.  See the close-up photo.  The spine is completely split.  The top and bottom seams are sharp, tight, and intact.  There is age discoloration.  The cover grades G.

Grading Information I always clean and then listen to every record I list on eBay.  I do this to make sure I can give as accurate a description of each record as possible.  I will do both a visual check and an audio check.  I absolutely attempt to give as objective a grading as I can.  I don’t ever want you to be disappointed in the quality of the album you receive.

I use four grades in my grading:  NM, VG+, VG, and G.  The only exception is a sealed album which is presumed to have vinyl in mint condition.  My NM grading means that the vinyl looks and plays as though it is the first time out of the sleeve.  The VG+ rating is used on any album that plays great but has one or two small defects.  It may have a pop here and there or some occasional background static.  On a VG album you can expect that, typically, this album will play great, but you’ll see more defects on this than your VG+ rated album.   Most often the VG rated album may even play well enough to be graded VG+, but the color or blemishes drop the grading.  Likewise, you may occasionally find an album that looks almost NM but the sound quality just isn’t there.  That’s why I play every album first, because this does happen.  In this case the vinyl will be graded VG.  Occasionally I will list an album with a grade of G. This is one where I consider the collectible value of the album to be great enough that the copy being presented is worth having as a filler copy.

Shipping Information – Combined Shipping We are beginning to experience disruptions in shipping, both in the United States and internationally.  Several US Postal Service distribution centers are closed because of funding cuts and politics.  I will continue to ship within 24 hours of receipt of your payment.  However, delivery times will potentially be impacted.  If you are concerned about these delays, shipping Priority Mail is an option, though will be more expensive.  If you would like me to ship your package at the Priority Mail rate just let me know and I will send you an updated invoice.  Combined shipping is still an option, but I apologize.  I can’t guarantee one price on Priority Mail.  The shipping cost will be based on the weight of your package.  For Media Mail, shipping is $4.00 in the continental U.S.  In addition, I will happily combine records from multiple auctions to reduce total shipping cost.  In fact, I welcome it!  Shipping will be $4.00 in the U.S regardless of the number of auctions won in any 5-day period.

As of January 26, 2020, all international shipping rates have gone up 25%.  Canada shipping is calculated based on weight using US Postal Service rates.  Combined shipping is also welcomed here and does result in significant per-album cost savings.  The first album will be shipped for $21.  Additional albums will be shipped for $6 per album, with up to four pounds able to be shipped before we need to use International Priority shipping.  At that point we will work together on final determination of shipping cost.

Shipments to outside the US and Canada will vary depending on your country.  Typically the cost per album will be no more than $25.  Combined shipping is welcome here as well, at a cost of $10 per additional album up to the maximum of four pounds.

All albums will be shipped in specially designed album hard cardboard mailers with a cardboard insert to prevent damage upon opening.  The vinyl is removed from the cover and presented in a new poly sleeve.  I am committed to one day turnaround on shipments.  If I receive payment before 7:00 AM Central Time I will package and ship that same day.

Thanks for looking and please contact me with any questions.