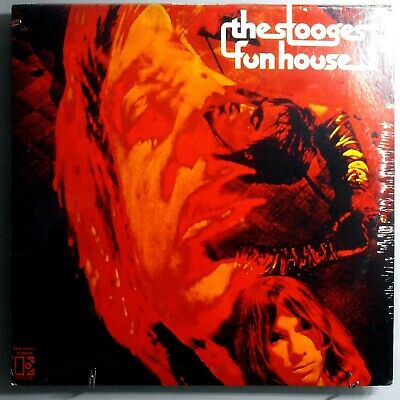 <img src= http://pics WE CURRENTLY HAVE  MORE THAN 200  LISTED ITEMS

·       THE THICKNESS OF THE VINYL, THE APPEARANCE AND THE CONSTRUCTION OF THE COVER, LABEL’S LOGO AND OTHER PERIPHERAL ELEMENTS OF THE COVER, ARE ALL PERFECTLY CONSISTENT WITH THE ORIGINAL, FIRST PRESSING OF THIS TITLE.

(►PLEASE SEE THE IMAGE OF THE COVER, LABEL OR BOTH, SHOWN BELOW)
(Note: this is a REAL image of the ACTUAL item you are bidding on. This is NOT a "recycled" image from our previous auction. What you see is what you’ll get.  GUARANTEED!)

The Stooges' first album was produced by a classically trained composer; their second was supervised by the former keyboard player with the Kingsmen, and if that didn't make all the difference, it at least indicates why Fun House was a step in the right direction. Producer Don Gallucci took the approach that the Stooges were a powerhouse live band, and their best bet was to recreate the band's live set with as little fuss as possible. As a result, the production on Fun House bears some resemblance to the Kingsmen's version of "Louie Louie" -- the sound is smeary and bleeds all over the place, but it packs the low-tech wallop of a concert pumped through a big PA, bursting with energy and immediacy. The Stooges were also a much stronger band this time out; Ron Asheton's blazing minimalist guitar gained little in the way of technique since The Stooges, but his confidence had grown by a quantum leap as he summoned forth the sounds that would make him the hero of proto-punk guitarists everywhere, and the brutal pound of drummer Scott Asheton and bassist Dave Alexander had grown to heavyweight champion status. And Fun House is where Iggy Pop's mad genius first reached its full flower; what was a sneer on the band's debut had grown into the roar of a caged animal desperate for release, and his rants were far more passionate and compelling than what he had served up before. The Stooges may have had more "hits," but Fun House has stronger songs, including the garage raver to end all garage ravers in "Loose," the primal scream of "1970," and the apocalyptic anarchy of "L.A. Blues." Fun House is the ideal document of the Stooges at their raw, sweaty, howling peak.

(EXCERPT FROM AN ONLINE REVIEW BY MARK DEMING, ALL MUSIC GUIDE  /ALLMUSIC.COM/)

If I could award "The Most Aggressive Garage/Heavy Metal/Psych album ever recorded" medal to a band or album, this one would be a strong # 1 contender. There is absolutely no doubt in my mind that, as he was recording this album, Iggy Pop was nothing if not desperate / deranged man. One can simply hear the existential agony and anger pouring out from every groove and every song. The genuineness of this music simply cannot be questioned. This is Rock the way it was supposed to be in the beginning, and Rock that would have been, if we had not had Bobby Vees, Pat Boones, Fabians and their likes to spoil the party. The original album comprised of seven songs, four on side (A) and three on side (B). The songs on side (B) still, some twenty years after I heard this album for the first time, remains for me the single most extreme form of Rock’n’Roll ever created. Comparisons with other fierce, unyielding and uncompromising R&R cult classics don't do Stooges any justice. Maybe John Lennon’s "Plastic Ono Band" album comes close in terms of sheer psychopathic intensity, but that’s about it. This album is a category unto itself. Nothing else comes even close. Its a big cosmic vortex of pain, agony, anger, resentment, and nasty, unprintable attitude.  Finding a still sealed original copy?!?! Forget it – not even a HOPE!!! This may be the last one you will ever see.

This is the original US-made gatefold cover of this album. All subsequent issues of this album came out with a plain, regular, single-slot cover. ALSO: we have heard many people claiming that this album originally came out on a red Elektra label with the large white "E" . Unfortunately, there is no such thing: EVEN THE WHITE LABEL PROMO PRESSINGS WERE ON A ‘BUTTERFLY’ LABEL!!!  RED-LABEL US pressing of "Funhouse" does not exist AND  will continue to not exist!!!

If this is of any relevance (and we do not claim that it is) "FUNHOUSE" is an important  entry in our personal top-50 favorite album list. Other entries- in no particular order- include Otis Redding, Love, Sam Cooke, Jimi Hendrix, Velvet Underground, The Byrds,  Bob Marley & The Wailers, Frank Zappa ,  Muddy Waters and others)

(a)          THE ALBUM IS STILL FACTORY SEALED AND IS BELIEVED TO BE PERFECTLY MINT. Please note: sealed items are assumed to be mint and are sold as-is, as we have no way of inspecting them. For our policy on still sealed records ►click here (PLEASE READ BEFORE PLACING A BID).

(b)            The record is  apparently  pressed on a beautiful, thick, inflexible vinyl, which was usually used for the first or very early pressings. Usually, the sound on such thick vinyl pressings is full-bodied, vivid, and even dramatic. Do not expect to obtain such a majestic analog sound from a digital recording!