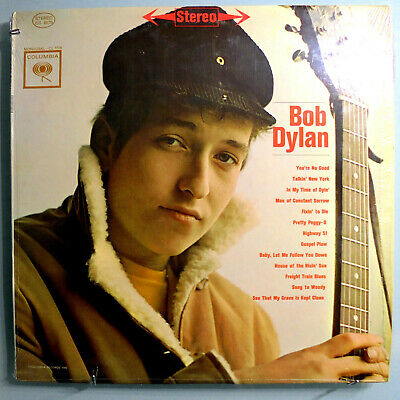 WE CURRENTLY HAVE  MORE THAN 200  LISTED ITEMS

·       COVER IS STILL IN ITS ORIGINAL SHRINK (CELLOPHANE) WRAP

(Note: this is a REAL image of the ACTUAL item you are bidding on. This is NOT a "recycled" image from our previous auction. What you see is what you'll get.  GUARANTEED!)

By know you know that the first pressing of Bob Dylan's first album on the impossible "six eye" label is near-impossible to find: it can easily fetch upward of $2,000.00 on the open market. And here’s why it is so rare:

About fifteen years ago, we met at one of the local record shows in New York City a gentleman named Marc (we did not remember his last name). At the time Dylan’s first record was released, he was about 18 and – at least so he claimed – he was working as a bike messenger for Columbia Records headquarters in NY City and had personally hand-delivered a production order signed by John Hammond, Sr.  for 500 stereo and 3000 mono copies of this album. We do not have any means of independently verifying this information, but judging by the colossal rarity of this album, we find the story altogether credible.

And those 500 stereo "six eye" labeled copies – that was it, folks.  There would be no more. No additional press runs on this particular label was ever ordered. Columbia would soon phase out the “six-eye” label altogether and introduce the new, black and red “360 stereo label”, and so all subsequent pressings of this album (as well as the first  pressings of the next four Dylan albums) would appear on this, new Columbia label.

Now for the music: this truly IS a piece of history: this is an album that announced Bob Dylan’s arrival to the unsuspecting world; the work that started the entire Dylan cult, which would follow merely a year or so later, on the heels of his next album (“Freewheelin’ Bob Dylan”). Capably produced by the legendary John Hammond, Sr. (who, among others, discovered such stars as Billie Holiday, Robert Johnson, Aretha Franklin and Bruce Springsteen and was the father-in-law of Benny Goodman and the father of John Hammond, jr (you figured as much, didn’t ya?) , the album shows Bob Dylan's deep and genuine love for all forms of archetypal musical Americana, particularly traditionals, spirituals, folk, blues and work song, but also his evolving, maturing ability as a songwriter.

Track listing: You're no good -Talkin' New York - In my time of dying - Man of constant sorrow - Fixin' to die - Pretty Peggy-O - Highway 51 - Gospel Plow - Baby, let me follow you down - House of the risin' sun - Freight Train Blues - Song to Woody - See that my grave is kept clean.

Bob Dylan's first album is a lot like the debut albums by the Beatles and the Rolling Stones -- a sterling effort, outclassing most, if not all, of what came before it in the genre, but similarly eclipsed by the artist's own subsequent efforts. The difference was that not very many people heard Bob Dylan on its original release (originals on the early-'60s Columbia label are choice collectibles) because it was recorded with a much smaller audience and musical arena in mind. At the time of Bob Dylan's release, the folk revival was rolling, and interpretation was considered more important than original composition by most of that audience. A significant portion of the record is possessed by the style and spirit of Woody Guthrie, whose influence as a singer and guitarist hovers over "Man of Constant Sorrow" and "Pretty Peggy-O," as well as the two originals here, the savagely witty "Talkin' New York" and the poignant "Song to Woody"; and it's also hard to believe that he wasn't aware of Jimmie Rodgers and Roy Acuff when he cut "Freight Train Blues." But on other songs, one can also hear the influences of Bukka White, Blind Lemon Jefferson, Blind Willie Johnson, and Furry Lewis, in the playing and singing, and this is where Dylan departed significantly from most of his contemporaries. Other white folksingers of the era, including his older contemporaries Eric Von Schmidt and Dave Van Ronk, had incorporated blues in their work, but Dylan's presentation was more in your face, resembling in some respects (albeit in a more self-conscious way) the work of John Hammond, Jr., the son of the man who signed Dylan to Columbia Records and produced this album, who was just starting out in his own career at the time this record was made. There's a punk-like aggressiveness to the singing and playing here. His raspy-voiced delivery and guitar style were modeled largely on Guthrie's classic '40s and early-'50s recordings, but the assertiveness of the bluesmen he admires also comes out, making this one of the most powerful records to come out of the folk revival of which it was a part. Within a year of its release, Dylan, initially in tandem with young folk/protest singers like Peter, Paul & Mary and Phil Ochs, would alter the boundaries of that revival beyond recognition, but this album marked the pinnacle of that earlier phase, before it was overshadowed by this artist's more ambitious subsequent work. In that regard, the two original songs here serve as the bridge between Dylan's stylistic roots, as delineated on this album, and the more powerful and daringly original work that followed. One myth surrounding this album should also be dispelled here -- his version of "House of the Rising Sun" here is worthwhile, but the version that was the inspiration for the Animals' recording was the one by Josh White.

(a)          WE GRADE THE VINYL AS STRONG NEAR MINT (LOOKS UNPLAYED). The original luster is very much intact, and the vinyl shines and sparkles almost like new.

(a)          The record is pressed on a beautiful, thick, inflexible vinyl, which was usually used for the first or very early pressings. Usually, the sound on such thick vinyl pressings is full-bodied, vivid, and even dramatic. Do not expect to obtain such a majestic analog sound from a digital recording!