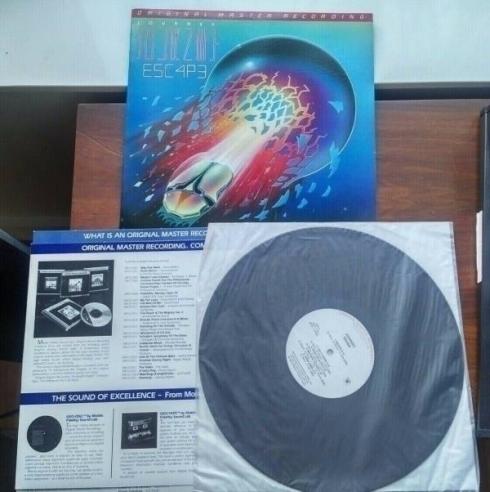 Journey - Escape - Vinyl LP*** SUPER RARE Mobile Fidelity Sound Lab press. The cat# is MFSL 1-144, which put the release year in 1984.
These were recalled the same day they were to go on sale due to licensing issues with CBS. I read an interview with an engineer at Mobile Fidelity that CBS had reached out to MFSL a couple of months before asking for ten titles that MFSL would like consider pressing. A few months later, CBS pulled licensing agreements for its materials and started to produce their own half speed master series. The story goes that Escape had already been licensed by MFSL prior and was scheduled for release the same day CBS pulled the license. Only a handful had made it to the shelves for purchase before stores had to pack them up and send them back. Therefore, only a few remain in existence.
I'm the original owner of this since 1986. This is, by far, the rarest album I have ever owned and it came to me by happenstance. It was in storage and sealed at a store I worked at called Raccoon Records in Lafayette La. At the time, it wasn't considered a collectors piece of any kind and, fortunately for me, no one who worked for the store had taken it. I didn't realize myself how rare it actually was until many years later. I think that because regular CBS versions were so abundant that non one at the store gave it a second look once it ended up packed away. And, also fortunately, I've always taken very good care of my albums. I kept it sealed simply because I had a CBS copy of it and really wasn't playing records much at the time anymore. I put it away and forgot about it. Cut to about 22 years, I'm going through my own boxes of vinyl and I see it. Opened it up and played it and it sounded fantastic. Then I did some research and realized just how rare it is.
The LP is NEAR MINT. The Cover is EX, with only minor edge and corner wear in a few spots. Includes all of the original MFSL content that came with it.I hate to part with it but as I'm only keeping vinyl I actually play, I have no room for collectors pieces. Since this is so rare, I would be unlikely to play it anymore myself for fear I might damage it. So I'm letting it go.
I will ship via USPS w/ Tracking and Signature required. I will double box this baby and ship with the LP safely kept in the poly-lined inner AND placed behind the cover to prevent any possibility of seam damage that might occur during transit. Sometimes LPs can shift and break the seam so I want to avoid that.