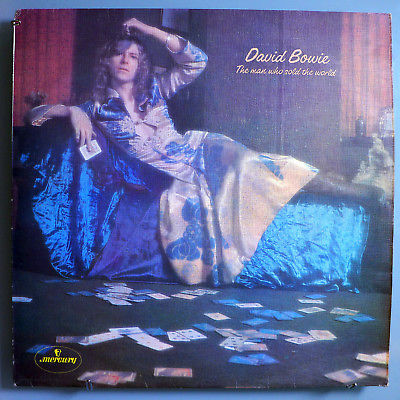 ·       RARE ORIGINAL VERSION OF THE LABEL WITH TONY VISCONTY'S NAME CORRECTLY SPELLED (AS 'TONY VISCONTY') NOT MUCH MORE COMMON MISPRINTED LABELS WHICH MISSPELL HIS NAME AS "TONNY VISCONTI".

·       THIS IS THE ORIGINAL, AUTHENTIC, FIRST U.K. PRESSING; THIS IS NOT A REISSUE, AN IMPORT, OR A COUNTERFEIT PRESSING.

This is an INCREDIBLY RARE David Bowie’s The Man Who Sold The World 1st PRESSING (1971) UK LP (Mercury 6338 041) with ORIGINAL AUTHENTIC "DRAG" Cover. This is guaranteed authentic. It is extremely rare as only a very small production of these jackets were made before being reissued with a different (less controversial) jacket. Apparently, the jacket depicting a reclining Bowie looking very androgynous (thus the "drag" nickname for the jacket), did not go over well upon the release of this LP in 1971 so was subsequently replaced with a less controversial jacket. These LP's have been counterfeited and later an authorized reissue was manufactured.

This jacket and LP being offered is 100% original. It is NOT a reproduction and is NOT a reissue.  A CERTIFICATE OF AUTHENTICITY WILL BE FURNISHED UPON REQUEST.

Even though it contained no hits, The Man Who Sold the World, for most intents and purposes, is the beginning of David Bowie's classic period. Working with guitarist Mick Ronson and producer Tony Visconti for the first time, Bowie developed a tight, twisted heavy guitar rock that appears simple on the surface but sounds more gnarled upon each listen. The mix is off-center, with the fuzz-bass dominating the compressed, razor-thin guitars and Bowie's strangled, affected voice. The sound of The Man Who Sold the World is odd, but the music is bizarre itself, with Bowie's paranoid futuristic tales melded to Ronson's riffing and the band's relentless attack. Musically, there isn't much innovation on The Man Who Sold the World -- it is almost all hard blues-rock or psychedelic folk-rock -- but there's an unsettling edge to the band's performance, which makes the record one of Bowie's best albums.

(EXCERPT FROM AN ONLINE REVIEW BY STEPHEN THOMAS ERLEWINE, ALL MUSIC GUIDE  /ALLMUSIC.COM/)

For additional historical or discography information on this album, including track listing ►click here

(a)          WE GRADE THE VINYL AS STRONG VG++. A few light abrasions  ARE VISIBLE, but they appear fairly  insignificant relative to the overall condition of the vinyl, and are only moderately visually distracting. For most part, the vinyl looks impeccable, without any MAJOR visual flaws or imperfections. Much of the original luster is intact, and the vinyl shines and sparkles almost like new.

(c)           The record comes in the original poly-lined “Made in England” stock inner sleeve with blue print.

THE COVER IS NICE --- ABOUT EXCELLENT OR VERY GOOD+++.

-         Cover has a minor (3 mm wide on each side) tape residue along the opening side (yellowish discoloration from the removed piece of old and aged scotch tape); barely visible on front side; only slightly more visible on the back side