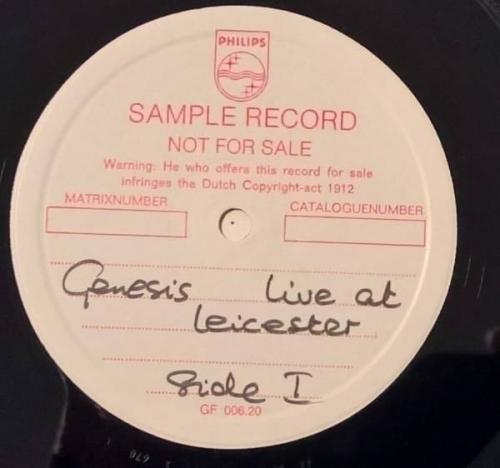 This is an original PHILIPS pressing, NOT a bootleg! 100% genuine. This album is part of the estate of a famous Greek radio producer, and it is one of the very few copies ever pressed.

Here is part of the story of this ultra rarity from the GENESISMUSEUMcom:

It is well known; that when the genesis live album was finally released in 1973 it was a single lp. It was also amazing that the best and most ambitious track "supper 's ready" was not included. For many years rumours sufaced, that a double lp version was leaked as a test pressing on the dutch philips label. However none had ever been seen and were almost impossible to find.

Some say between 20 and 50 copies were pressed, but to this day, i have only heard of about seven.

The test pressings have 4 sides with handwritten labels, but no album cover. Since they were done by hand, each label is a little different. the matrix numers on the vinyl are AA6830 140 1Y 1 670 1, 2, 3 and 4. On the included cue sheet the sides are referred to as 6830.140.1/2 and 6830.141.1/2. The cue sheets also show that all tracks were recorded in Leicester on Feb 25th 1973, except "Return of the Giant Hogweed", which was recorded in Manchester in february 24th 1973. These test pressings are the single most valuable and sought after genesis record.

One of the main reasons is that it includes recordings, that exist only on this record.

Worldwide shipping by DHL Worldwide Express (next day to Europe and NY, up to 5 days depending on destination USA, Canada and rest of the world)