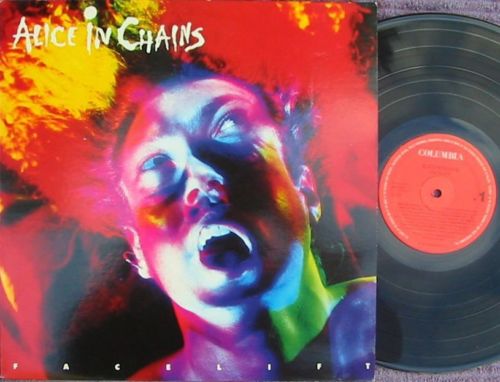 Original 1st Press Dutch LP released in 1990 on Columbia Records. Cat: 467201 1. Printed inner bag is in Excellent condition. This album has only been played twice!!

Long before the phrase, "Seattle scene" spoke of an impact that a new generation of musicians was having on rock music, Alice in Chains was struggling to be recognized in the shadow of bands that were more focused on image than craft. On FACELIFT, the band's major label debut, Alice in Chains proved that its fusion of blues, hard rock, and gritty imagery was a force to be reckoned with. While college radio stations ate up fare like "It Ain't Like That" and "We Die Young," the song "Man in a Box" became a banner track that pushed the band into the forefront of heavy rotation on MTV and the playlists of mainstream rock radio stations. Vocalist Layne Staley's moody, dynamic vocals on "Love, Hate, Love" tell a chilling tale of a homicidal psychotic lamenting and musing over what he's done to his lover. On tracks such as "Sea of Sorrow" and "I Can't Remember," guitarist Jerry Cantrell shows equally impressive skill in Sabbath-styled riffing, blues licks, and Hendrix-influenced solos. Alice in Chains made a brash musical and lyrical statement that gave the stale era of thrash and hair metal a much-needed facelift.

Tracks: We die young/ Man in the box/ Sea of sorrow/ Bleed the freak/ I canâ€™t remember/ Love, hate, love/ It ainâ€™t like that/ Sunshine/ Put you down/ Confusion/ I know something (bout you)/ Real thing.

Wrapping method: All records are sent in stiff cardboard mailers then wrapped in brown paper and sealed around edges with brown packaging tape. Records are taken out of sleeve to avoid seam splits and ring wear.

Post method for overseas: All parcels are sent via Australia Post and are sent on a standard airmail service. There are no tracking numbers on these items. If you require a tracking number the item will have to be sent as an insured item which incurs a further postage fee.