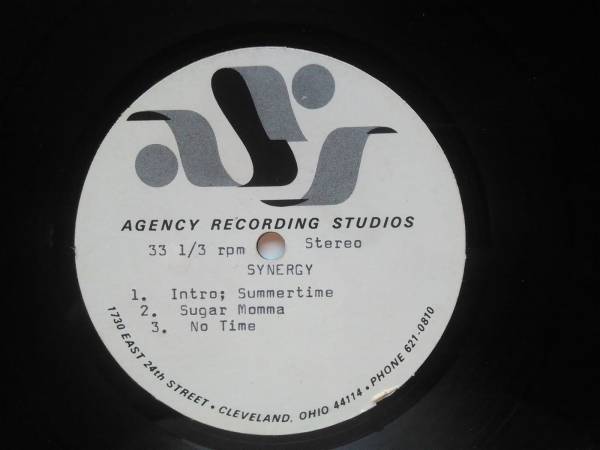 What a great and rare find!!
Unknown and unreleased Soul Gems!!
None of these tracks were ever released!
This is the only copy!!
Notes on this Acetate:

The disc is in decent shape, it does have some surface noise is some places but overall it plays very well. I made these MP3â€™s on a cheap MP3 Turntable, I am away from my normal setup so the noise and quality of these MP3â€™s is exaggerated by cheap equipment. So keep this in mind when you are judging the sound quality.

These recordings were made at the Agency recording studio in Cleveland,

closed, The Studio was located above the Famous Agora Ballroom and many famous live recordings

of the performances at the Agora were recorded there.

This Group: The Group on these 5 songs was called SYNERGY.

My guess is these recordings were made sometime in the later 60â€™s to maybe 70.

None of these recordings were ever released.

Having grown up in North East Ohio and having lived in CLEVELAND as a child in the sixties and later again in 1975, I have a good feel for the mood of this record.

The songs cover a wide range of styles from Northern Soul, to Psychedelic and I am sure if you asked the group they would say â€œthey had no labels and were just making musicâ€.

I have put all the tracks here and most of them are long so give them a full listen to see what I am talking about.

LINKS TO TRACKS BELOW