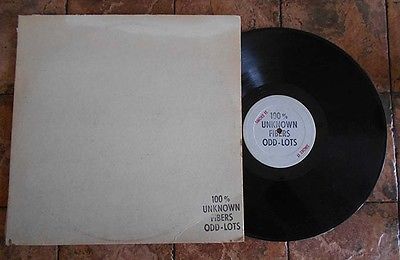 A note before we get started:

If you receive an item from me that you feel is not satisfactory, please CONTACT ME FIRST directly via eBay’s contact member link. Please DO NOT open a “case” or report an “item not as described.” These actions (for reasons only the eBay overlords can dictate) hurt my seller standing and ultimately have a significant financial impact on me and in turn you.

If you would like to return an item or feel an item is not as described, just CONTACT ME FIRST and let me know. I will make it right every time.

VERY RARE LP WITH INSERT ENTITLED 100% UNKNOWN FIBERS ODD-LOTS. THE DISC GRADES A VERY STRONG VG TO VG+. IT IS FULL GLOSS WITH LIGHT WEAR. THE LABELS ARE CLEAN. THE COVER GRADES A VG+. IT CLEAN WITH LIGHT WEAR BUTS HAS TAPE ON THE TOP SEAM AND SPINE. THE LP HAS THE ORIGINAL INNER SLEEVE AND INSERT! HERE IS SOME INFO REGARDING THIS RARE LP:

INSANELY RARE live LP documenting the Laguna Beach Christmas Happening festival in December 1970. The LP was probably pressed in 1971. The festival featured a lot of local unknown underground psych bands and was closely tied to legendary LSD distributors the Brotherhood of Eternal Love. Patrick of Acid Archives has researched and written a terrific article describing the festival and LP in detail.
Also, anyone interested in psychedelic or sixties culture should read the recently-published book "Orange Sunshine" which tells the fascinating story of the Brotherhood of Eternal Love.

Only a handful of known copies exist of this monster psych rarity. Some copies came with several inserts pertaining to the festival, and this copy has the original letter and the original inner sleeve with the printing. Very rare to find.

Here are some excerpts from the Acid Archives article, describing the LPbitself:

"About 25 years later, in the late 1990s, word was starting to spread among rare record specialists about a mysterious album titled “100% Unknown Fibers”. The record showed no track list or credits whatsoever, and from the rubber-stamped sleeve and old pressing it was assumed to be a bootleg,manufactured in the early 1970s. The problem was that no one could figure out who the artist being bootlegged was, as it didn’t sound remotely like anyonefamous. As questions were asked, a few more copies of “100% Unknown Fibers”were identified in collections around the US; in total about a half-dozen were accounted for.

An Orange County newspaper back in 1970 mentioned a few participating bands such as Sound Spectrum and Primal Scream, as well asthe aforementioned Sea & East Utopian Mission, but gave no details of their performances.

It must be mentioned that “100% Unknown Fibers” is a primitive recording withpoor sound quality, even as private pressings go. It’s likely to be an audience tape, rather than from soundboard. The music is mostly jammy acid-rock typical of the era, predominantly instrumental workouts on Hendrix and Cream riffs,with lots of raw fuzz leads and some vocals. One track has a trancey folk rock feeling, including flute. All over it is reminiscent of some of the Yahowa 13basement jams, like those heard on “I’m Gonna Take You Home”, minus Father Yod.There’s some nice grooves and feedback soloing here and there. It’s hard to determine how many different groups are featured on the album, but my guess is that it’s at least four different outfits, as the mixing and sound scapes differ, even while most of them are stylistically similar. A high point of the LP is the inclusion of several microphone raps from the Laguna Greeter and others, including the plea for Thorazine quoted above. One guy goes into a hostile rant about war, Nixon and Angela Davis, before being cut off with the reminder that the festival is about “love, not aggression”. The stage announcements combine with the crowd ambience, hovering police helicopters, and raw, improvised music to capture a moment in time, warts and all.

I HAVE A LOW MINIMUM AND NO RESERVE. I WILL COMBINE SHIPPING ON MULTIPLE PURCHASES. I ACCEPT PAYPAL AND ALL OTHER FORMS OF PAYMENTS ACCORDING TO EBAYS GUIDLINES. SHIPPING IS $5 FOR MEDIA MAIL WITH DELIVERY CONFORMATION. DUE TO RECENT INCREASES WITH THE U.S. POSTAL SERVICE SHIPPING TO CANADA IS $15 FOR USPS. SHIPPING INTERNATIONAL IS $25.

BE SURE TO CHECK OUT MY EBAY STORE FOR MORE GREAT LP'S AND COOL STUFF!!!!!