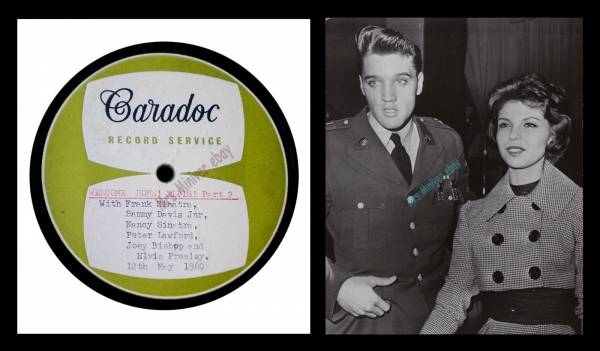 MUST HAVE ELVIS & SINATRA!

Here's simply the RAREST OFFICIALLY released 12" LP ever made on Elvis - Sinatra too!: A 1960 INDUSTRY ONLY Original Acetate recording of the legendary FRANK SINATRA TIMEX SHOW: WELCOME HOME ELVIS concert TV special! Why is this so rare? Because it was NEVER officially released except for rare industry ONLY original acetate LPs. This is one of those.

This disc is a MUST if you're looking to complete your original Elvis LP collection! This show was amazing for a host of reasons, Elvis' singing the best of them. His voice was never better. The quality of this original acetate can not be surpassed. His number, "Fame and Fortune" is especially well recorded and shines through on this original.

This two-sided LP record is in FANTASTIC shape and plays remarkably well. I think it's only been played a few times. I had it professionally transcribed and this 45 minute long treasure is an amazing listen. I love it so much that I've played the wav recording that was made of it over 100 times now.  If you buy-it-now at the FULL $3500 price I'll include the digital wav file of the professional transcription.

Accompanying the rare disc is an ORIGINAL 1960 News Wire Service photograph with identifying tag on back (see photos # 1 & 4). This photo was taken and issued March 9th, 1960 when Elvis was released from his military service. Nancy Sinatra met Elvis at Fort Dix New Jersey to greet him upon his arrival. That was BIG news at the time. Both were signed to star in the her father's, "Frank Sinatra's Timex Show." This was Nancy's first professional gig. She killed on the show and so she went on to star with Elvis in a feature film. This rare photo is an original and a great piece to add with this even rarer acetate disc - both made in 1960. The photo measures 4.5x5.5 inches

Additionally, you get a nice REPRODUCTION invite to the Timex Show! Included with this lot is a reproduction (not original) invite for the show ( see photo #5). It's a nice little extra memento I bought to go with the other two originals. I couldn't find an original invite. Besides, an original 1960 printed invite would have increased the price of this lot at least another $1000. This reproduction measures 5 and 3/8th by 4.5 inches

If you're looking for an investment/museum quality items, look no further. This almost 1-of-a-kind 1960 original is as rare as they get, with only a small handful out there. A 1950's acetate on an early Elvis number sold for $200,000 on eBay just a year or so ago. Below I've added the full story of this recording taken from the on-line encyclopedia Wikipedia.

On March 26, at 6.15pm, taping for the show took place at the Fontainebleau Hotel. It was Presley's first appearance on television in over three years, and his first serious performance since 1957, making Presley nervous about how he would be received. Colonel Parker, perhaps due to nerves of his own, had arranged for as many Presley fans as possible to fill the audience, although at least half of it was still made up of Sinatra fans. For the occasion, to fit in with Sinatra's "rat pack" persona, Presley wore a tuxedo.
Presley's first, very brief, appearance on the show was at the beginning. Entering in his army uniform, Presley joined the other guests on the show, including Sinatra's daughter Nancy, to sing a part of "It's Nice To Go Trav'ling". His other two songs, "Stuck On You" and "Fame And Fortune", had been released only days before the taping of the special. Presley also performed with Sinatra, each singing a song the other had made famous, taking turns to sing a verse each; Presley sang "Witchcraft" and Sinatra sang "Love Me Tender". Both songs were sung in the swing style that Sinatra was famous for, although critics were divided on how well it had sounded; "Presley had difficulty with the melody of the Sinatra hit. The harmony between the pair on â€œLove Me Tenderâ€ came off in good style.
After approximately eight minutes on screen and a quick promotional plug for his new film G.I. Blues, Presley was gone. The remainder of the show revolved around Sinatra and his "rat pack" friends.
Airing
The show, now titled The Frank Sinatra Timex Special and sponsored by the Timex Company, aired nationally on ABC-TV on the evening of May 12, 1960 between 9.30 and 10.30pm EST. Viewing figures for the show were high, with a 41.5% Trendex rating, approximately 67.7% of the overall television audience. To put that into perspective, the second rated show in that time-slot, NBC's Ernie Ford Show, featuring Johnny Cash and Groucho Marx, pulled in an audience share of 21.1%.
Reception
Reviews for the show were generally good, although not everyone was impressed. Life Magazine said "Sinatra does his best singing of the season.", and referred to Elvis as "still a reigning favourite after two years in the Army". Billboard magazine stated,
The expected dynamite was, to put it politely, a bit overrated... Presley has much to learn before he can work in the same league with pros like Sinatra, Joey Bishop and especially Sammy Davis Jr., who just about broke up the show with his chanting and impressions... The real winner was probably the Fontainebleau Hotel, where the show was taped last March. The hostelry got a terrific publicity break.
The New York Times was a little harsher on Presley when they reviewed the show.
While he was in service, he lost his sideburns, drove a truck and apparently behaved in an acceptable military manner. But now he is free to perform in public again, as he did on last nightâ€™s â€œFrank Sinatra Showâ€ over Channel 7... Although Elvis became a sergeant in the Army, as a singer he has never left the awkward squad. There was nothing morally reprehensible about his performance; it was merely awful.
Ed Sullivan, the man who only three years earlier had called Presley "a real decent, fine boy" when the young star last appeared on his show, also gave a very harsh critique of the Sinatra special. Writing in the New York Daily News, Sullivan said that Presley "minus his sideburns, has substituted what the ladies probably would call a 'high hair-do'. His hair is so high in front that it looks like a ski jump". Sullivan also criticized Parker's ability to acquire $125,000 for eight minutes work; "Col. Tom, using the logic of a farmer, is a firm believer in not giving a hungry horse a bale of hay". However, Sullivan had failed to take into account the fact that the special did not belong to Presley, it was Sinatra's show, and there were other guests that had to be given airtime.  In her book, Elvis For Dummies, author Susan Doll notes how important this television special was to the career of Presley. She writes "Appearing with Sinatra suggested that Elvis was following the same career path [as Sinatra] and was therefore the natural heir to the Voice". She also points out that Presley's singing style and appearance on the show "clearly signaled that Elvis was courting a mainstream, adult audience".

Buying this rare disc is ECONOMY PROOF! Why waste your money in the stock market? It can crash regardless of any decision you make and can even crash regardless of any decision made by the company related to the stock - Leaving you with a near worthless piece of paper that won't inspire anyone! With the purchase of as this rare 1960 Elvis record, it doesn't matter what happens to the economy, you'll still have the record, which can be played, displayed and enjoyed. The magnificence of art and historic documents have an inherent value that relates to civilization and society. Unless civilization itself crashes then these items will hold their value, and, if civilization itself crashes - Who'll care about money? This classic disc is definitely ECONOMY PROOF!

â˜† Please write with any questions. If you're in the market for top quality original vintage movie posters or Star Wars, then please click here