BOB DYLAN Autographed LP The Times They Are A-Changin' 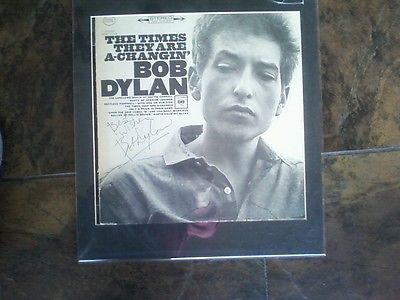 BOB DYLAN Autographed LP The Times They Are AChangin

THE TIMES THEY ARE A CHANGIN

* Note change in shipping policy made 6/20/16 to international buyers, described below.

This Demonstration album is signed by Bob Dylan with the inscription â€œBest Wishes  Bob Dylanâ€. A Certificate of Authenticity verifies that the signature is genuine. The vinyl record, inner liner with lyrics and cover are all clean.

The vinyl is in excellent condition and appears to have never been played. The cover has a few minor scuffs along the outside edges and a wonderful tan patina that gradually fades inward from the edges of this vintage album. The back of the cover has a light, circular wear mark. Words from the album are printed on the back of the cover and continued inside on the insert, which is in excellent condition.

The top of the reverse of the album cover has the words â€œDemonstration - Not For Saleâ€ stamped in gold. This type of album â€“ a Demo album -  was typically sent for free to radio stations by the record company with the hope that the DJs would give the record play time and thereby introduce the music to a large population and boost sales. The circumstances of Bob signing this are not known â€“ whether at some sort of meet-and-greet or when the album was sent out. I have never heard of or seen another album quite like this one.

Dylanâ€™s inscription is also rare. He does not give many autographs, and when he does, itâ€™s nearly always just his name. For him to have added the phrase, â€œBest Wishesâ€ is unusual, and a nice touch. The autograph is verified as authentic by the Sports Cards, Toys and Antiquities Company of Long Beach, CA. They are members of the UACC, IACC and the Manuscript Society (societies of autograph and manuscript collectors). Their Certificate of Authenticity is included.

Also included is an album holder purchased from Rock Art Picture Show. It was used to display the album and protect it from accidents and the elements. One corner of the holder got cracked however (see photo). So of course itâ€™s optional whether or not the buyer wishes to use it to display the album. At any rate, it is included.

Please note: Costs for delivery within the U.S. will be paid by the seller, including insurance. Delivery costs to buyers outside the U.S. vary widely and will need to be paid by the buyer.

The Times They Are a-Changin' is the third studio album by American singer-songwriter Bob Dylan released on January 13, 1964 by Columbia Records. Produced byTom Wilson, it is the singer-songwriterâ€™s first collection to feature only original compositions. The album consists mostly of stark, sparsely arranged ballads concerning issues such as racism, poverty and social change. The title track is one of Dylan's most famous; many feel that it captures the spirit of social and political upheaval that characterized the 1960s.