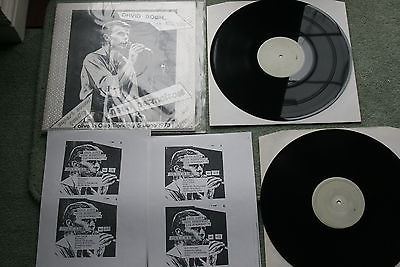 Insurance is £6.50 in addition to the postage charges shown and will be added to the invoice to the lucky winner

I have had a significant number of enquiries about what number edition this is. I cannot see a number but the scan I have added shows the corner of the card sleeve where it might well say limited edition. I only ever saw two copies of this issue and the other was identical to this. I used to go to record fairs all the time in the late seventies and eighties and pretty much bought all releases of this ilk from Stardust from the Seventies to Modern Feeling. I knew most of the dealers, in the South East back then, one of whom was particularly good at helping me out source titles. He had a stall, at a London fair, when a Scandinavian came in and wanted a heavy trade for two copies of Neon Permafrost....four double LP's for the pair i.e 2 for 1. Normally it was 1.5 to 1 for Swedish titles such as caught in the act, one magical moment, etc. Fortunately he did the deal and I got one of those two copies. It could have been that in subsequent weeks there was a deluge of them and I would of felt I overpaid. However, I never got a sniff of another copy, even a Swedish dealer I frequently purchased from had not seen one but had merely heard of it
I sold many titles from my collection in the nineties to fund the outside and earthling tours and the bulk of the rest went a few years back. I am now selling a portion of what remains, including this one, a few will be kept for sentimental reasons
Finally, if you want a number on the sleeve this is not for you. If you have bid and expected a number of the sleeve, then feel free to cancel.