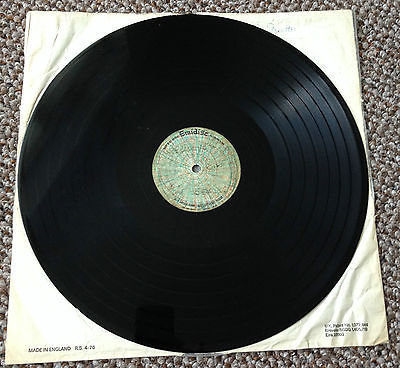 A surviving original UK mono acetate of one of the most important albums of all time.
Recorded between April and June 1966 with George Martin again serving as producer, Revolver was the seventh studio album of The Beatles and marked an adventurous progression from the group's 1965 Rubber Soul in terms of style and experimentation and heralded the band's arrival as studio innovators. The album's sounds include the the incorporation of tape loop and backward guitar recordings on the psychedelic, influential "Tomorrow Never Knows", the use of a classic string octet on "Eleanor Rigby", and the Indian music backing of "Love To You". Aside from varispeeding, reversed tapes, and close audio miking, the sessions for the album resulted in the invention of automatic double tracking which was soon adopted throughout the music industry. This album saw a new maturity in McCartney writing, challenging the Lennon-McCartney song writing dominance, and with Harrison's interest in the musical culture of India, there were now 3 prolific songwriting Beatles
The album was ranked first in Colin Larkin's book @All Time Top 1000 Albums and third in Rolling Stone magazine's list of the 500 greatest albums of all time
Genuine Beatles acetates are extreamely rare and album acetates are virtually impossible to find. Only a few were made for the band, management and the record company
What makes this even more interesting is that the labels have been decorated in psychedelic blue, green and red felt pen markings
This is similar to that of Alexis Mardas's Sgt Pepper LP emidisc acetate which sold at Christies back in 2004 for Â£15,535
The Sgt Pepper label design can be seen herehttp://www.christies.com//lotfinder/lot/the-beatles-4276698-details.aspx?from=searchresults&intObjectID=4276698&sid=41bbae1a-d349-4ca9-a764-7f225b372c69
I cannot confirm a link with this disc to Magic Alex, only the similarities. This record has been authenticated by Christies fine art auctioneers and i will include relevant paperwork from them with the disc
The handwriting on the labels is the same hand as that of the "Til There Was You/Hello Little Girl acetate which was reported to be that of Brian Epstein. This superb early acetate sold for Â£77,500. See details herehttps://www.google.co.uk/url?sa=t&rct=j&q=&esrc=s&source=web&cd=2&cad=rja&uact=8&ved=0ahUKEwiMkdHj6J3MAhVCXBoKHXvFBJIQFggiMAE&url=http%3A%2F%2Fwww.bbc.co.uk%2Fnews%2Fuk-england-merseyside-35870751&usg=AFQjCNGzJmi9L4MCeDUFFXi5G4KeQzdmOg&bvm=bv.119745492,d.d2s
Acetates should only be played to a minimum and as this disc is nearly 50 years old and is extreamly fragile it has not been played by me. (Christies have had it played and confirmed it is the mono version) Visually  the LP is very good with some scuffs and marks as you would expect of a disc of this age.
The importance of this acetate in music history cannot be underestimated and as a blue chip Pop Culture investment, its value will continue to rise
Stored in a temperature controlled, smoke and pet free enviroment
Bid with confidence, i have sold many high end pop rarities, see my other listings
Shipping is listed as Â£9.50 but buyer is responsible for insuring for the full amount
International bidders please email first for a shipping and insurance quote
Any questions, please feel free to ask
Good luck and happy bidding