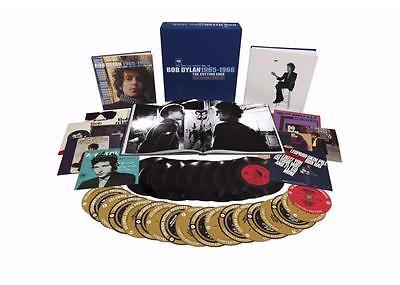 This is a brand new collector edition of this amazing set.  I have never played any of the records or cds.  The outer plastic was removed and I looked at everything inside but have not disturbed the contents other than to look at the packaging when it first arrived.  Anyone looking at this listing already knows that they made 5,000 and that is it, they are sold out and there will be no more of this historic set.  This is number 3538 out of 5,000.  This thing must weight 15 or more pounds.

The 18CD Collector's Edition of The Cutting Edge 1965-1966: The Bootleg Series Vol. 12 is limited to a worldwide pressing of only 5,000 copies, and includes every note recorded during the 1965-1966 sessions, every alternate take and alternate lyric. All previously unreleased recordings have been mixed, utilizing the original studio tracking tapes as the source, eliminating unwanted 1960s-era studio processing and artifice.

The 18CD edition includes Dylan's original nine mono 45 RPM singles released during the time period, packaged in newly created picture sleeves featuring global images from the era. The limited edition includes rare hotel room recordings from the Savoy Hotel in London (May 4, 1965), the North British Station Hotel in Glasgow (May 13, 1966) and a Denver, Colorado hotel (March 12, 1966) as well as a strip of original film cels from "Don't Look Back."

To read a great review of the set: